If you’ve ever seen a toddler put a colander on their head, grab a spatula sword, and tie a sheet around their neck to act out a role as a knight, you’ve seen dramatic play in action. Dramatic play is where children take on a role and act it out.

Other common examples might be playing “The floor is lava” or a simple game of house where everyone plays a family member. These roles are all common forms of play and also important for development. When children are participating in dramatic play, they’re learning all sorts of skills that will be important to them later in life.

Dramatic play usually comes in two basic forms. Structured play involves a scenario suggested by an adult, and has a determined end point. An example of this might be acting out a trip to the doctor’s office where the child can practice listening with a pretend stethoscope or giving a shot.

In unstructured play, kids usually make up the roles themselves and it usually has no defined end point. One moment a child is fending off dragons, the next they’re pretending to fix the computer.

Dramatic play has a remarkable number of benefits to them. Through the lens of an imaginary world, it’s often easier to work out real world problems and approach them in a safe manner. If they’re afraid of going to the dentist, approaching it in play can help them practice a safe way of dealing with their fears. Here’s a few other ways it benefits children.

In order to know what is happening next in the story, children have to describe it to each other. “Pretend that—” followed by what ever story line they are working on has a vast world of vocabulary choices attached to it, and helps younger kids learn new words from older kids through play.

If your child is pretending to ring up groceries at a cash register, numbers may end up flying as they explore the world of math. This can present math and other skills in a more fun context, helping build skills later in life.

Kids with excess energy can often find a new outlet for blowing off steam, by playing in an appropriate manner. Dramatic play can turn even the most ordinary room into a castle, a tropical jungle, or a vast desert.

Kids can go anywhere with the help of a costume box and an active imagination, which can do a lot to release energy in bored children.

How to encourage dramatic play

Many kids find ways to engage in dramatic play on their own, but you can help encourage this play with a few simple changes. One of the best ways to get some dramatic play going is to have the tools needed to inspire their minds. A box of old thrift store clothing can be all they need to get started.

If they need a bit more motivation, try acting out a scene yourself, or suggesting a theme and organizing a specific time for play.

Dramatic play is incredibly useful, and it’s easy to get started at home or in the classroom. Many kids just need the inspiration to throw on a mask, take on a role, and get busy with the art of play.

We foster and develop attitudes and skills essential for life success. 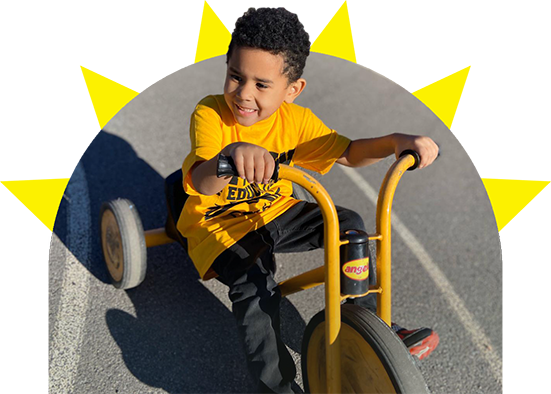